skip to main | skip to sidebar

We spent time yesterday remembering those who have been lost....there were so many this month.
I am fortunate that my dad came home safe and sound and I am thankful for that.
We are spending our day at graduation parties..friends and family.
We are having a busy week so I will try to take pictures to share as the week goes on!
Blessings to each of you.
Posted by ohiofarmgirl at 12:07 PM 1 comment:

The porch is decorated and ready to go!!! 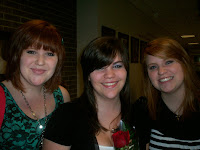 Our middle daughter was inducted into National Honor Society on her college campus last weekend. This is a picture of her with her sisters!! We are so proud of her. She is actually a high school senior but has been taking college classes all year. She had an ear infection and a sinus infection that day so she was a trooper to just smile and make the best of it.

This morning I decided to take some time and decorate the front porch for summer. With Memorial day so close I decided to use a red, white and blue theme this year...I painted the floor a few days ago and some of the trim to give it a crisp clean feel. Now it will be done for our graduation party that is fast approaching.
I used everything that I had on hand...I may add a few geraniums to the mix but otherwise I think it is complete...what do you think?
Very hot here today...I decided against working outside this afternoon...I have a meeting and a softball game so I guess I am taking the afternoon off!!!
Have a safe weekend. Blessings! 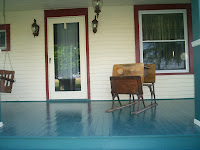 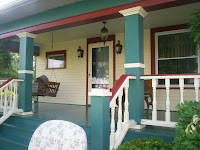 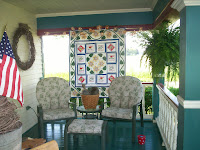 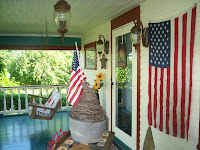 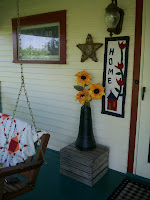 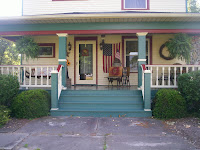 Posted by ohiofarmgirl at 2:06 PM 8 comments:

My first job putting on shingles!!!( and my last) 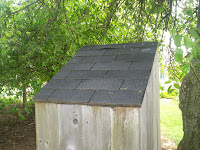 I wanted to show you my first shingling job...it was a small job but it had a great impact on the finished product. My sister gave me her little storage shed that looks like an outhouse. I decided to put new cedar shingles on it and I think it turned out great!!! Dh showed me the ropes and I went from there...what do you think? 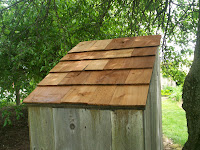 I have been working on getting things ready for the graduation party this week. I wanted to share a few pictures of our bonus room but I guess that will be later since my dd is sleeping in there and I can't get the pictures. I am happy with the way it is turning out but you may be surprised when you see the pictures.
If you have been following my blog then you kinda know the style of decorations of my home. This room is a real change from that style. I wanted something a little more bright and clean...a little french country garden. You will have to come back to see if I got that finished product.
For those of you who wanted to see more of the dresses from prom...I am having a hard time getting them to load onto blogger but when I get it figured out I will show the full length that you asked to see.
Today we are headed to the college. My middle daughter is being inducted into the National Honor Society today. We are proud parents. She is a senior in high school but has been taking classes at the college all year....she has been doing a wonderful job!!!! I will also try to share those pictures too!!!
Well, I am off for now to finish drying my hair, although, it is raining again and it will just make my hair curly... I was going to straighten it for today..well the best plans can always be changed!!!! Blessing to each of you!
Posted by ohiofarmgirl at 7:55 AM 9 comments: 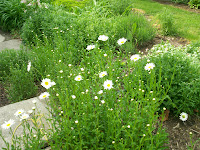 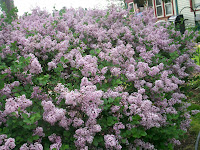 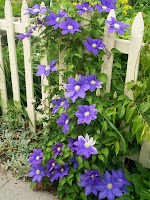 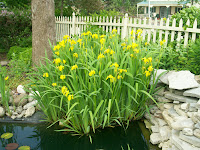 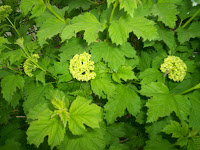 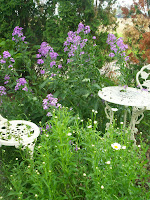 Good Sunday Morning!!!! The sun is shining and the weather is cool...I call that just perfect!!! I am just heading out to church but wanted to share a few pics from around my garden...enjoy.
Posted by ohiofarmgirl at 9:20 AM 12 comments: 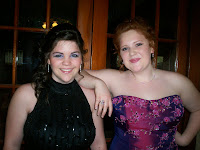 Our little darlings on prom night. This was before the dates arrived but they were adorable the entire evening!!! 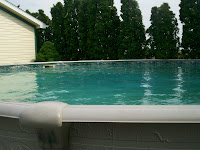 All my hard work is paying off the pool is starting to sparkle but let me tell you the water is so cold...each time I sweep it and clean out the bottom my pant legs are wet and I am frozen...but it will be worth it once it is crystal clear.

We are off to another softball game. One daughter plays second and one plays first. It is such a joy to see them playing their hearts out. The dark haired one is the one that hit the grand-slam home run earlier this week...such fun.
Hoping the storms miss us this time....be blessed.
Posted by ohiofarmgirl at 4:33 PM 6 comments:

I am not at my computer so I won't be able to post any pics today but I just wanted to fill you in on the happenings.
Mother's Day was a lot of fun...spent Saturday with my Mother and sister...lunch and a day of shopping...many laughs.
Sunday I was on the worship team for our morning services then off to the zoo with my hubby and children....it was so packed...we had to laugh. We stayed until they closed and had a great time. We then went to supper at Max and Erma's and finally back home.
Since then I have been working on cleaning out the garage....now if you think I am sharing a picture...no way...but I will once it is cleaned. LOL Not really...it isn't that bad this year..thank goodness..mostly just moving things around and cleaning ect. It has been rainy and cold...so I can only spend a few hours before I get too cold.
And finally....we had our first softball game last night...rain and all and what a game. We had 4 girls hit home runs but one of our daughters hit a home run with the bases loaded...what a great hit. We won 13 to 4...it was fun to see the girls work together and have such success.
Well, I will try to post again soon...I have some beautiful plants blooming...will try to share. Until next time, be blessed.
Posted by ohiofarmgirl at 6:36 PM 3 comments:

I have such a story for you.....first, let me say, the events I am about to tell you about are true and they all happened today!!!!
My Mother, my two daughters and myself went shopping today. Then to a restaurant for some lunch. The restaurant was almost empty but it still took 35 minutes to get our food...but that was ok because we were almost done shopping...just one more stop.
After leaving our last store...my van would not start...try as I might...the battery was dead. I have been a member of AAA since 2006 and never used it so today was the day ( or so I thought). I called and after being on hold for way too long...finally they were sending someone...within 30 minutes. At 30 minutes they called and extended it for another 20....said he was on the way and we were next! After 1 hour and 3 minutes I decided I had enough and started walking to a muffler shop. They were kind and generous and came right away...jumped the van and checked my battery. It needed replaced and I decided to just do it right there. Once they started working on it I decided to call AAA back to say that no one ever did show up. The girl on the other end of the phone could have cared less and said there was nothing she could do....(at this point I am very agitated)...I tell her I want to talk to her manager...after being on hold...too long...he tells me about the same stuff...nothing he can do but the guy is on the way. He says the guy had been broken down and that was the hold up. Now if this is true...wouldn't they have called me to let me know there was yet another delay and send someone else>?????? After much discussion I told him that I pay over $200 a year for a service they did not provide....and didn't care that there was a problem.... So I explained that I really wanted the AAA service for our 3 teenage daughters so they would not have to climb out of the car and go get help like I did. He just wanted to argue and I hung up... Then the man in the repair truck pulled in...waved and motioned me over to his truck. Are you kidding me...I was not about to walk over to his truck and see what he wanted...I just walked back inside the muffler shop and ignored him.
We drove about 3 miles and ran into a hail storm that forced us to pull over until it passed....there are dents on my hood...
I have been laughing about all this as I told the story, although, it wasn't too funny at the time. The men at the muffler shop were wonderful and we did get home with a new battery and a pledge to call AAA tomorrow to further discuss this problem.
Maybe I should have stayed home. I hope you are laughing because after much frustration I can now see the humor!!!
I didn"t exercise today but I did eat healthy and we are all home safe and sound...a little more wise and a lot less confident with AAA....but we are fine! Enjoy your evening!
Posted by ohiofarmgirl at 8:51 PM 11 comments:

ohiofarmgirl
I was raised in the farm fields of Ohio where we spent long days with our parents on the farm...but this blog is about more than that.